Take a gentle 2 mile stroll around the disused quarry. There are many old buildings, tunnels and a Cornish Beam Engine to explore. Take care near the edges of the flooded parts of the quarry, (especially with dogs!)
Dorothea Quarry commenced working in the early 1820s, though there were a number of smaller workings on or near the site before this. By 1848 it had become the dominant quarry in the area, employing 200 men and producing 5000 tons of finished slate. Production peaked in 1872 at 17442 tons. In the 1930s over 350 men were employed at Dorothea. Production dropped significantly after the start of World War II and the quarry closed in 1970.
The quarry is now flooded and regularly used (unofficially) for scuba diving.

This is an easy walk but stout shoes/boots should be worn.

Find this on OpenStreetmap or on Google Maps
Ordnance Survey Grid Reference: SH 49120 53215
Follow this route with ViewRanger 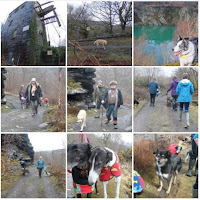